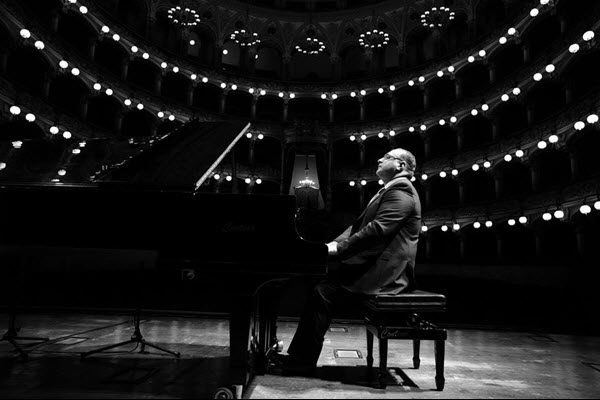 He graduated at the “Vincenzo Bellini” music institute in Catania and he took the High specialization course diploma at the Euterpe Academy. His teachers were Agatella Catania, Boris Petrushansky and Pietro Rattalino.

Midway through his pianistic career, Epifanio Comis branched into conducting.

In May 2013 E. Comis conducted Filharmony Symphony Orchestra in Donetsk on Rachmaninoff Festival all Piano concertos and the Symphonies.

He is on the teaching staff for the main piano course at the Vincenzo Bellini’s State Conservatory in Catania and at Accademia Pianistica Siciliana. Students of Professor Comis have already got a lot of International Prizes and they are winners of important international piano competitions . In addition to his performing career, E.Comis has served as jury member for several international piano competitions, including International Piano Rachmaninov Competition in Moscow. Professor Comis is invited yearly to piano Master Classes at the Hunter College in New York, at the North Carolina University, at the Duke University of Durham, at the Ecole Normale de Musique of Paris, at the Thessaloniki State Conservatory, at the Monterrey University in Mexico,at the Manhattan School of Music NY, at the West Chester University Philadelphia,Vienna Music Academy “Orpheus”, at the State Moscow Conservatoire by Tchaikovsky and at Chopin Academy in Warsaw and Chopin college in Moscow where he also gives a Superior Music Course on the Concert for piano and orchestra.

In 2011 Maestro Comis created Accademia Pianistica Siciliana in Catania the music institution for talanted young students. In 2014 Academy has collaboration with prestigious University of Catania

Anniversary Rachmaninov’s 2013 year Maestro Comis was invited as a member of jury to the Fifth International Rachmaninov piano competition in Moscow. In the same year He has won Sergey Rachmaninov International Award. The Award ceremony took place at Tchaikovsky Conservatory of Moscow. This award from the Russian Rachmaninov Society and International Foundation “Belcanto” is conferred on individuals who take a special interest in Rachmaninov’s work and spirit and is intended to support and pay tribute to their work. In 2014 Professor Comis was artistic director of the International Chamber Music Festival in Catania “Le Grandi Serate Musicali” with supporting of University of Catania and Accademia Pianistica Siciliana.

His lessons are individual. Please check the related regulation for Epifanio Comis.