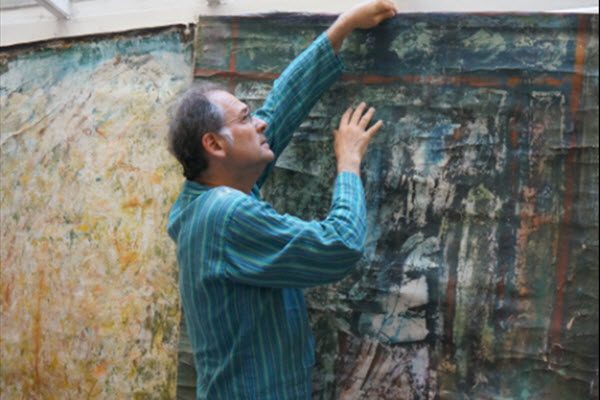 The French-American, Composer, Improviser, Soundpainter, teacher Etienne Rolin born in Berkeley California
in 1952 has a catalogue of over one thousand works which reveal a marked taste for eclecticism ranging from
solo to opera through big band charts

The French-American, Composer, Improviser, Soundpainter, teacher Etienne Rolin born in Berkeley California in 1952 has a catalogue of over one thousand works which reveal a marked taste for eclecticism ranging from solo to opera through big band charts. Following degrees in Music and Philopsohy (University of San Francisco he moved to Paris in 1974 to work with Messiaen, Xenakis Franco Donatoni Nadia Boulanger. Performing as
electric guitarist in the 1970 American premier of the Who’s Rock opera “Tommy” in San Francisco had a major impact on his decision to devote his life to music. He has since explored the rich facets of extended techniques on the flute, saxophone and clarinet families. Works have been written for his two main instruments the Basset horn and the Bansuri flute.

Though a ten year collaboration with Soundpainting founder Walter Thompson He has been highly involved withinterdisciplinary projects linking music dance theater and visual arts through the Soundpainting sign language.

He performed his multi-media work Caverne 3D for 18 performers including electronics and live film editing through the Soundpainting language. He has invented the first graphic representations of the basic language in two volumes of Erolgrpahs ed. Questions de Tempéraments. He is in frequent performance mode with his NASA ensemble, performing Hindustani raga on Bansuri flute and and new music on basset horn. From 1985 to the
present day 2016/17 he has been teaching in Bordeaux as Analysis professor Improvisation Workshop leader and instructing at other institutions Pôle Supérieure Musique et Danse and the Université of Bordeaux.

Via the SCRIME A Bordeaux research group linked to the University he has established a working partnership with computer analysts and programmers namely Shlomo Dubnov from UCSD. Playing samples on Bansuri flute, Basset horn and tenor saxophone the Py-Oracle program reacts in real-time for segmentation analysis and re-arranged forms with transition triggers. Previous research involved gesture recognition via Kinect to allow for
real-time computer conduction.

He has recently started a collaboration with TIME and Space research performing trio from Singapore (Robert Casteels, Isaiah Koh and Dirk Stromberg) Most notably improvising with and writing the first score for Dirk Stromberg’s innovative computer stick the Phallophone.

He is the author of four books (in French) Emerging Ear being the most recent and are available through a publishing association Editons Tempéraments (over 500 works from 30 composers ) which he co-founded in Bordeaux (www.temperaments.fr) He has published numerous recordings of his music. His music has been premiered by Ars Nova, Ensemble 2E 2M Ensemble Intercontemporain and by soloists such as Claude Delangle,
Pierre-Yves Artaud, John Kenny, David Taylor, Etienne Péclard, Vincent Beer-Demander ; Jazz-New Improvisation experience include collaborations with Steve Lacy Jerry Bergonzi, Daniel Humair, Vinko Globokar, Bernard Lubat, Joëlle Léandre, Glen Ferris, Kent Carter, Walter Thompson, vocalist Janice Jackson, Shlomo Dubnov and Gyorgy Kurtag Jr.

In 2016 he was invited to Milano (Conservatorio G.Verdi ) to Madrid (Institut Français) and made a brief tour in Chile Santiago Iquique to bring soundpainting to students as well as the youth of under privileged communities.
On this tour funded by the U.S. Embassy in chile, he conducted two open form works of his own of for big band as well as two sextets by jazz master Andy Middleton who was soloist.

The same year he has been elected president of Temp’ora an international association of over 250 members worldGwide for creative artistic exchange. Future projects include elaborating a theater music opus for the soprano Janice Jackson and developing groups of improvising composers in different parts of France and around the world. Very open to the connections between music and other diciplines he has produced a large body of paintings for artGmusic exhibitions (Paris Washington DC Chicago Berlin Bordeaux) and more recently collaborating with German painter Jutta Irion. He is a member of Armand Florea’s CIAC (Centre Interactif Art Cognitif) association for research on links between art and cognitive science.