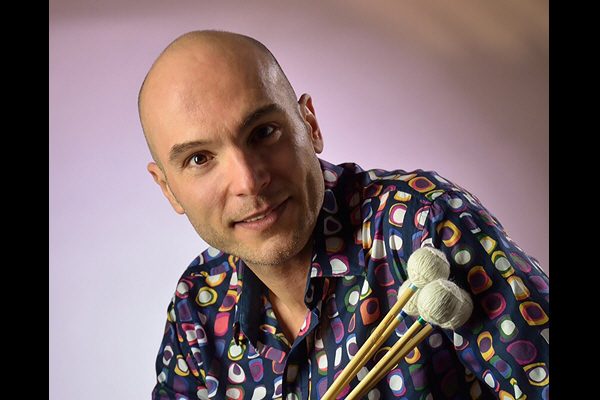 Considered one of the most interesting and complete talents of his generation, much appreciated by specialized magazines; the American Percussive Notes defines him, in a review of his CD’s, one of the most interesting interpreters and exponents of the marimba world scene, defining the recordings “catalysing”, attentive to stylistic details and with a clear historical-philological vision demonstrated by few interpreters.

FILIPPO LATTANZI – Percussionist
Considered one of the most interesting and complete talents of his generation, much appreciated by specialized magazines; the American Percussive Notes defines him, in a review of his CD’s, one of the most interesting interpreters and exponents of the marimba world scene, defining the recordings “catalysing”, attentive to stylistic details and with a clear historical-philological vision demonstrated by few interpreters.

Lattanzi’s artistic activity includes many solo concerts that have led him to perform in several states, including Canada, France, Germany, Greece, Holland, Poland, Spain, Turkey, United States, Switzerland and Venezuela, welcomed in prestigious concert halls such as the Musikalle in Hamburg, the Chopin Academy in Warsaw, the Prague Concert Academy, the Teatro Comunale di Bologna, the RAI Auditorium in Turin, the Teatro Comunale di Firenze, the Politeama di Palermo, the Auditorium “Giuseppe Verdi” of Milan, the Piccolo Teatro of Milan, the Konzertsaal KKL of Lucerne, “Renée Weiler Hall” of the Greenwich House of New York.

Alternating with the soloist activity collaborations with important chamber formations such as the “NexTime Ensemble”, the “Arnold Schoenberg Choir” of Vienna and the “Aterballetto” Dance Company of Reggio Emilia, with which he inaugurated several editions of “Di Nuovo” Music Festival “at the Valli Theater of Reggio Emilia,” Ferrara Musica “at the Teatro Comunale of Ferrara, and the” Biennale “of Venice.

Since 2005 he has been the artistic director of the “World Percussion Movement” and he still directs him actively collaborating with the dance movement “World Dance Movement” (founded by choreographer Michele Assaf), and participating in prestigious events in which, among others, some of the most important international artists such as Steve Reich, and choreographers of international prestige such as the American Desmond Richardson and the French Bruno Collinet.

In 2008 he founded the “Adams International Percussion Group”, also formed by Emmanuel Sejournée, Bogdan Bacanu, Kuniko Kato, Svet Stoyanov and Ludwig Albert, with whom they performed in Holland, Belgium and Italy, inaugurating prestigious European Festivals and holding concerts broadcast live on television for the Dutch National Networks. In 2019-20 a long tour is planned in the United States, Canada, Spain, Japan, Australia and New Zealand. The ensemble will perform in some of the most prestigious contemporary music festivals on the international scene.

Born in Bari where he began the course of musical studies, graduating with full marks and praise. He then specialized with Maestro Gastone Sylvestre at the Conservatoire National de Region “Rueil Mailmaison” in Paris, obtaining, for four consecutive years, the gold medal and the “Premier Prix de la Musique à l’unanimité et Félicitations”. In ’98 he was also conferred, for the first time unanimously, the “Prix Spécial de Virtuosité en Marimba”, in whose prestigious commission are placed composers of the caliber of George Aperghis and Carlos Alsina as well as percussionists like Jean-Pierre Drouet and Willy Coquillat.

At the same time he perfected with Michael Rosen at the “Oberlin College of Music” in the United States, with Robert Van Sice at the “Royal Conservatory of Rotterdam” and with Leigh Howard Stevens at the “Royal Academy” in London.

He has also perfected himself in jazz language with some important drummers such as Peter Erskine, Massimo Manzi, Tommy Igoe, Dafnis Prieto, John Ramsay, Antonio Sanchez, Steve Smith, Dave Weckl. His latest performances have been appreciated at the “Padova Jazz”, “Valsugana Jazz” and “Fano Jazz” festivals, alongside artists such as Alex Acuna, Amik Guerra, Marco Pacassoni and Maurizio Rolli.

Since 2001 Filippo Lattanzi is the artistic director of the Italian label DAD RECORDS which has under his belt 26 titles ranging from ancient music to classical, contemporary and jazz.

Among his activities we can also mention his important knowledge demonstrated over the years as Ton Meister (Technician and director of registration) in which he offered his expertise to labels of national and international prestige as the Italian “Stradivarius”, “Azzurra Records “,” VelNet “and” DAD RECORDS “.

The percussion course held by M° Filippo Lattanzi is open regardless of nationality and age limit to pianists who intend to extend and refine the classical and percussion concert repertoire.

EACH STUDENT WILL HAVE:
daily lessons of technique, execution and interpretation of the repertoire chosen by the student, and the possibility to attend concerts organized by the San Marino International Music Summer Courses.
The selection of students who will perform in concert is at complete discretion of individual teachers.

VENUES
The courses, the concerts and other complementary activities will be held in different venues in the historic center of San Marino.

ATTENDANCE CERTIFICATE
The participants will receive a Participant Diploma and the auditors an Attendance Certificate.

ACCOMMODATION / FOOD
A wide network of hotels / B&B/ restaurants with special prices will be available to students and will be listed on the San Marino Artist’s website;

OBSERVANCE OF THE REGULATION
The participants are personally responsible for any damage they may cause to public or private property, to persons or things, and for any injury or illness they may suffer during or outside the class or during the practice time. The registration to the course includes the acceptance of this regulation. Any claim must refer to the text in Italian. Place of jurisdiction is San Marino.

His lessons are individual. Please check the related regulations for Filippo Lattanzi.