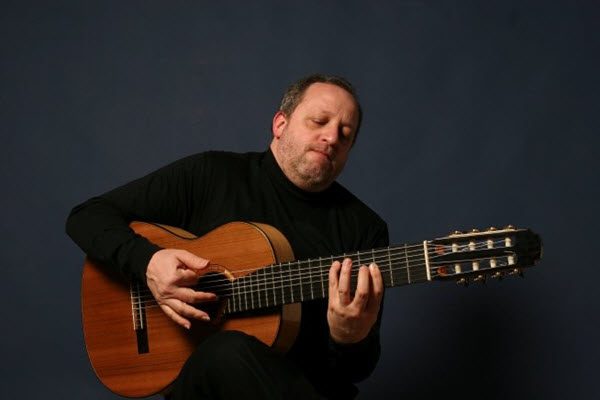 Lucio currently teaches guitar at the Conservatory of Avellino, Italy, where he is the Director of the Guitar Department and of I and II level courses.
Lucio Matarazzo plays with a ”Leonardo” guitar (cedar/cypress) by M° G.Giussani, with Exagon tuning machine and  D’Addario EXP strings.

He has been playing for 22 years as a member of Fragnito-Matarazzo duo with whom he won many international competitions for guitar (like the one in Berlin and Stresa) and Chamber Music (Palmi, Forte dei Marmi, Trapani) and published in the modern music series direct by A.Gilardino for Bèrben, the works for two guitars by Dodgson, Piazzolla, Castelnuovo-Tedesco (integral of the 24 Preludes and Fugues), Ruiz-Pipo, Farkas, and even 2 LPs and 5 CDs.

After twenty years of experience with the duo, that allowed him to play in the main European cities – performing among other things, for the first time the 24 Preludes and Fugues “Les Guitares bien Tempérées” op.199 by M. Castelnuovo-Tedesco – he recorded several solo CDs of guitar studies by 19th century composers: for Arkadia-Agora two CDs with music by M. Carcassi (Op.60 studies and Caprices op.26) and L. Legnani (36 Caprices op.20), two international hits, and a CD with a collection of studies and various compositions by M. Giuliani, another big success so as to be recognized as the best CD of 1999 by the Mayor of Bisceglie, hometown of M. Giuliani.

In 2001 he performed at the Teatro San Carlo, Naples, some pieces from “Le marteau sans maître” in a concert dedicated to P.Boulez, with the French composer in the audience.

LM was a founding member of GuitArt Quartet, acclaimed as one of the most original and inventive guitar ensembles in the world of modern guitar. With this quartet he played all over the world, with a preview dedicated to GQ orchestral works, such as the Italian Concerto by A.Gilardino, the Concierto Italico and Gismontiana of L. Brouwer and the Concerto Rapsodico of G. Drozd, even in cross contexts such as the pop singer Antonella Ruggiero (debut at the Milan Forum Assago), with the actor Alessandro Haber, with Steve Hackett (founder of The Genesis), Frank Gambale (Chick former band Korea) and Maurizio Colonna at the Guitar Event 2000.

With GQ he recorded, with L. Brouwer, a CD (GHA) and the DVD “Diario Italico” with the world premiere of the Concierto Italico, directed by the author, broadcasted even by ClassicaTV Sky.

LM is also interested in publishing, as artistic director of WeBlogMagazine “DotGuitar.it”, multiplatform magazine dedicated to the guitar, followed by about 50 thousand followers worldwide, and the online label DotGuitar/CD, which published recordings by many of the best Italian guitarists like A. Desiderio, G. Bandini, A. Mesirca, A. De Vitis, P. Bonaguri, V.N. Paradiso, etc.

He recently created a Collection, which he directed, dedicated to the 19th Century studies for guitar which provides, for the first time in the world in this area, a spread of a three-pronged platform: “Sheet Music” published by Ut Orpheus, “Cards with tips for studying and performing” published on international stores online (Amazon, etc), “CD” published on the iTunes Music Store / Amazon etc.
Have just been published the first volumes of the catalog – including F.Sor: 20 studies, M.Giuliani: Study Choice, vol.I and Vol.II, M.Carcassi: Studies Op.60, L.Legnani: 36 Caprices op.20, N. Paganini: Ghiribizzi, 37 sonatas, Mertz: Bardenklange Vol.I and II – which will include about 40 vols.

Many times he was a member of the judges of important international competitions, such as the “Segovia” in Palma de Mallorca, the “Yamashita” in Berlin, the “De Bonis” of Cosenza, the “Pittaluga” in Alessandria. Last year he was President of the judges of one of the most important guitar competitions in the world, Koblenz, Germany.

LM teaches guitar at the State Conservatory of Music, Avellino.

“the performance…is excellent…He demonstrates that if you take a piece of well-tailored music and apply the ordinary rules of musical performance to it, as any pianist would do, the result is magic”
(Colin Cooper – Classical Guitar Magazine)