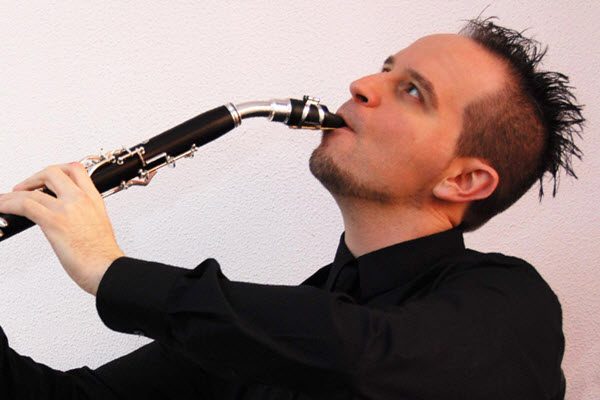 Michele Marelli, who holds a major in clarinet with highest honors “Summa cum laude” from the Conservatory of Alessandria under the guidance of Prof. Giacomo Soave, and a degree in Modern Literature from the University of Turin with a thesis on Stockhausen, furthered his studies in England with Alan Hacker, in Germany with Suzanne Stephens and in France with Alain Damiens, and studied composition and electronic music in Torino and Milano. Internationally acclaimed as a virtuoso of the basset horn and as one of the best contemporary music soloists of his generation, he is also active as a painter and as a composer.

In october 2014 he has been awarded the prestigious Rubinstein Prize “una vita nella musica giovani” at the Gran Teatro La Fenice in Venice together with the composer Salvatore Sciarrino, considered by the critics as a Nobel for music.

In 2016 he signs a contract with Universal Music and records his debut album “Michele Marelli – Contemporary Clarinet” with the renowned Decca Classics, gaining an incredible succes among the critics: Nomination at the ICMA 2017 (International Classical Music Awards), 5 stars Amadeus, 5 stars Musica.

As an 18-year-old he met Karlheinz Stockhausen, establishing a profound artistic relationship that lasted for more than a decade during which, chosen by the Maestro himself as soloist of his Ensemble, Marelli played World Premières under his instruction and guidance and recorded 3 CDs for the Stockhausen Complete Edition. Stockhausen himself led Marelli to devote himself to the basset horn. Marelli’s mastery of the instrument led Giorgio Gaslini to define him as one of its “leading performers”. “Very gifted” according to Stockhausen, “an absolute genius” according to Suzanne Stephens, he performs as a soloist in some of the most prestigious concert halls and radio programs in the world.

A six-time winner of the Prize of the Stockhausen Stiftung für Musik, other prestigious international prizes he has been awarded include the First Prize at the International Contemporary Chamber Music Competition in Krakow (2004), the Valentino Bucchi clarinet Competition in Rome (2007), the Honorary Logos Award in Belgium (2000), the Jeunesse Musicale auditions (2001), the DESONO association scholarship (from 2001 to 2005) and in 2006 the “Master dei Talenti Musicali” award from the Fondazione CRT, the Prometheus Award for the excellence in culture from the Confindustria Italiana, the International Composition Competition of the Bienale Koper 2012.

He has worked with some of the leading composers of our times, giving world premieres of their compositions mostly dedicated to him, such as Karlheinz Stockhausen, György Kurtàg, Marco Stroppa, Helmut Lachenmann, Franco Donatoni, Kaija Saariaho, Rebecca Saunders, Fabio Nieder, Sylvano Bussotti, Alberto Colla and many others.

His Cds featuring the clarinet and basset horn works by Stockhausen published by Stradivarius and Wergo, immediately become reference recordings and are awarded many prizes by international press and critics such as the ICMA 2014 Nomination (International classical music awards) as best contemporary music cd of 2013, 5 Diapason in France, 5 stelle di Musica, 5 di Amadeus and others.

The Stockhausen Foundation entrusted him to perform the World Première of Stockhausen’s UVERSA, 16. Stunde aus KLANG, for basset horn and electronic music during the MusikTriennale in Cologne, the last basset horn piece composed by the composer before his passing. His performance was later published by the Stockhausen Complete Edition.

At the Donaueschinger Musiktage, with the Hilversum Orchestra conducted by Peter Eötvös, he performed the World Première of the “Let me sing into your ear” concerto for basset horn and orchestra by Marco Stroppa, which the composer actually dedicated to him and this performance was later recorded for the label Neos.

He performed with the Swiss director Christoph Marthaler in his latest production for the Wiener Festwochen 2013 and the Festival d’Automne in Paris “Letzte Tage: ein Vorabend”.