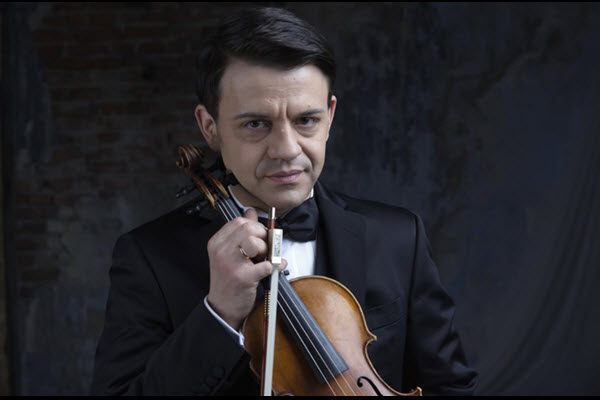 Oleksandr Semchuk is often a member the jury in international violin and chamber music competitions.
Has made several CD recordings, and recorded more than seven hours of music as soloist to the Golden Collection of the Ukraine, with contributions from the great solo repertoire including the Brahms and Sibelius concertos.
He plays a violin by Auguste Bernardel 1840 and uses the bow “White Lady” by Vera Navea.

Oleksandr Semchuk began studying violin at 4 years of age with Maestro I. Pylatiuk. When only eight years old he started his brilliant career, performing his first concert as a soloist with orchestra. Among his teachers are such world renown violinists as Bohodar Kotorovych, Tibor Varga, Viktor Tretyakov and Alberto Lysy.
At an early age, Semchuk won the prestigious and much coveted Youth Assembly of Art Competition in Moscow, going on to win the Mykola Lysenko International Competition in Ukraine, the City of Gubbio Award, Italy and other international competitions.
Meanwhile, he embarked on a career that has brought him worldwide success, both as a soloist with orchestra and playing chamber music, collaborating with such internationally renowned musicians as Bruno Canino, Andrea Lucchesini, Mario Brunello, Kostantin Bogino, Michael Kugel, Vladimir Mendelssohn, Giovanni Gnocchi, Gabriele Mirabassi, Maxim Rysanov, Oleg Kogan, David Cohen, Boris Petrushansky, Kirill Karabitz, Volodymyr Sirenko, Niklas Eppinger, Denis Shapovalov and many others.
In recognition of Semchuks great contribution as founder and promoter of the cultural project Artists for the rebirth of Ukraine, The Ukrainian state awarded him with the title of Merited Artist of the Ukraine in 2002. Throughout the territory of the former Soviet Union, Oleksandr is the youngest artist to be awarded the title Knight of Honour of the State. For outstanding cultural achievement and development of the Italian violin school, he was awarded Laszlo Spezzaferri (2013) and Rinaldo Rossi (2014) prizes of honor.
Oleksandr Semchuk has been living in Italy for several years, where he has built up a busy teaching career, working at the School of Music of Fiesole and the Music Academy of Florence. In 2010 he was invited to coordinate the Department of Strings at the International Piano Academy “Incontri col Maestro” in Imola, where he currently teaches. His success as a professor of violin are evident in the multiple awards and prizes (over 40) won by his students in important international competitions over the years. These include the Oistrakh International Competition (Moscow), Brahms International Competition (Pordschach), Monaco Master’s International Competition (Monaco), Kreisler International Competition (Vienna), to name but a few. His former students include leaders and members of major orchestras throughout Europe, as well as teachers of violin at various Conservatories.
Since 2014 he holds annual masterclasses at the State Conservatories of Bologna, Cesena, Trento and Reggio Emilia.
Oleksandr Semchuk is often a member the jury in international violin and chamber music competitions.
Has made several CD recordings, and recorded more than seven hours of music as soloist to the Golden Collection of the Ukraine, with contributions from the great solo repertoire including the Brahms and Sibelius concertos.
He plays a violin by Auguste Bernardel 1840 and uses the bow “White Lady” by Vera Navea.