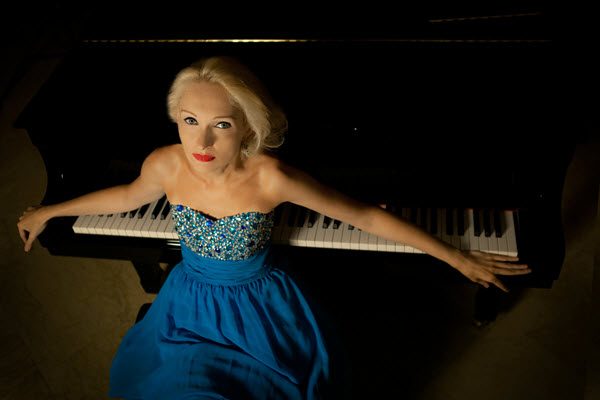 Violetta Egorova began to play and improvise on the piano age of four. At the age of six she made her performing debut on TV playing pieces from “Children’s album” by Robert Schumann.

Her early career was powered by ability, which she had absorbed from her great mentor Lev Naumov, to make every note sing. In 1991, while still studying under Professor L. N. Naymov at the P.Tchaikovsky Moscow State Conservatory, Art and Electronics a joint Russian-American recording enterprise honored Ms. Egorovas talent by recording a CD with the music of Mozart and Prokofiev in celebration of the anniversary of those two composers birth. Furthermore, Ms. Egorova has recorded several CDs under the various labels, such as Universal Music & V., Teichiku Records and has been featured on radio and television broadcasts in Italy, Turkey, Canada, Egypt, Ecuador, France, and Russia. Ms. Egorova has performed in some of the most famous concert halls in the United States, Italy, France, Switzerland, Turkey, Egypt, Monaco, Romania, Austria, Russia and China. Violetta is a regular guest artist with many renowned ensembles such as the State Academic Orchestra of Russia, Utah Symphony Orchestra, the chamber orchestra Kremlin, Orchestra del Festival Pianistiñî Internazionale di Bergamo e Brescia, Orchestra Sinfonica di Perogia, The George Enescu Philharmonic Orchestra, Harbin Phylharmony Symphony, Cairo Symphony Orchestra, Moscow State Symphonic Orchestra, as well as the orchestra ‘Young Russia’, and has played under the direction of Pavel Kogan, Joseph Silverstain, Arnold Katz, Epifanio Comis, Mark Gorenstein, Juliano Silvery, Urij Tsuruk, Ilarion Ionescu-Galati, Augustino Orizio and Constantine Orbeljan.

She has also appeared at international musical festivals in Spoletto “Del Due Mondi” and Sermonette “Pontino di Musica” (Italy), “Sanat Haber” in Istanbul (Turkey), ETNAFEST in Italy, Rachmaninov International festival 2013 in Ukraine as well as “Music in Exile”, “Music of 20th Century”, “Christmas at the Kremlin” and “Russian Winter” in Moscow (Russia), among others.

Violetta Egorova is a teacher of Piano High Specialization Courses at the Accademia Pianistica Siciliana of Catania.

Her lessons are individual. Please check the related regulation for Violetta Egorova.