Upcoming Projects and Teachers for the 2022 edition.

Preview of courses with the spring season!

List of Projects and Teachers for the Summer Season

Besides teaching at the conservatoire ‘G. B. Martini’ of Bologna, Stefano Malferrari Classified among the winners of a few international competitions, he gave concerts, recitals and soloist with orchestra, chamber music groups, and ensembles of contemporary music for celebrated Italian associations
and concert halls. 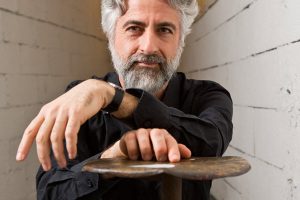 The Piano: learning, concert, competition, recording, exam. Andrea Padova first achieved critical attention when he won the “J.S. Bach International Piano Competition” in 1995. Since then has concertized throughout the world in the most known theaters. 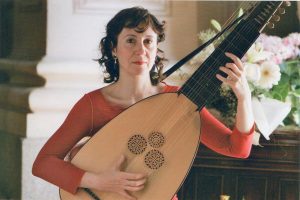 Francesca Torelli has participated as a soloist (lute and voice), in numerous festivals in Europe, South America and Australia. She has provided and played the music for various theatrical productions and has appeared as a lutenist on television programs for RAI 2, Channel 4, and others. Since 2001 she is lute professor at the Giuseppe Verdi Conservatory in Milan. 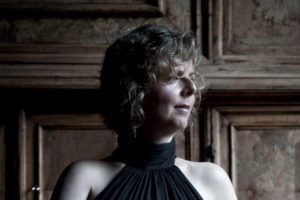 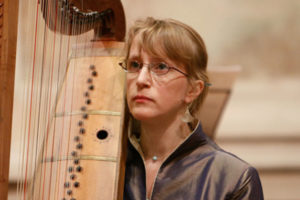 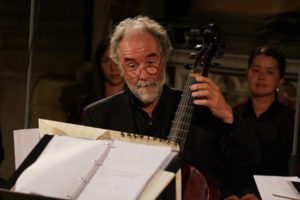 Along his career, Paolo Zuccheri has been playing regularly with this orchestra in the most important European and international ancient music Festivals. He is teacher viola da gamba at the conservatorio Agostino Steffani in Castelfranco Veneto, of Contrabass and Violone at the “Accademia di musica antica” in Brunico (Bz), by the “laboratorio per la Musica e l’Opera Barocca” in Bazzano (Bo), at Oficina de Musica in Curitiba (Brasil). 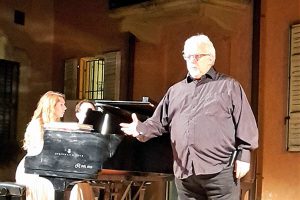 Romano Franceschetto (baritone), graduated from the Parma Conservatory of Music with honours and made his
operatic debut in 1981 in Verdi’s La battaglia di Legnano. Although his repertoire is extensive, ranging from the 17th century to modern day, he specialized in the “buffo” roles of the 18th and 19th centuries which he has sung in major theaters in Italy. Romano Franceschetto has made a number of recordings for NUOVA ERA, BONGIOVANNI, RUGGINENTI, CHANDOS. 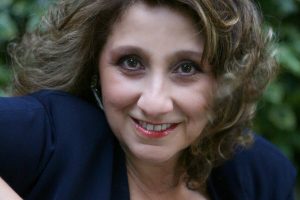 Sopran, is Professor at Milan ” G. Verdi” Conservatory. She boats a very wide opera and concert repertoire that includes traditional characters (Violetta, Manon, Susanna) and lesser-known works. She has staged numerous contemporary music performances of he works of renowned composers and is perfectly acquainted with the lieder repertoire performed alongside leading pianists such as A. Ballista, M. Damerini, M. Delli Ponti. 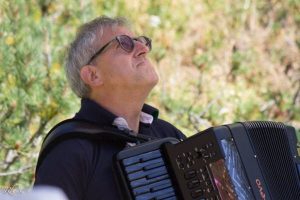 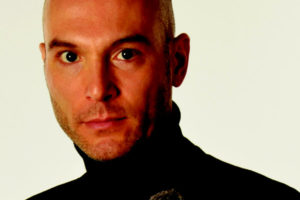 Considered one of the most interesting and complete talents of his generation, much appreciated by specialized magazines; the American Percussive Notes defines him, in a review of his CD’s, one of the most interesting interpreters and exponents of the marimba world scene, defining the recordings “catalysing”, attentive to stylistic details and with a clear historical-philological vision demonstrated by few interpreters. 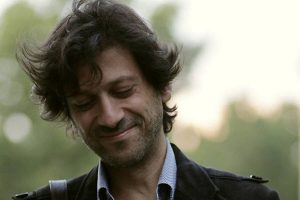 Composer, pianist, orchestral conductor, electronic musician and researcher, Lorenzo Pagliei studied with Salvatore Sciarrino, Azio Corghi, Ivan Vandor, Giorgio Nottoli and Philippe Leroux. He graduated at the Master in Composition of Accademia Nazionale di Santa Cecilia in Rome. The president of the examination board was Luciano Berio, with whom he later had a fruitful period of exchange on his own music. 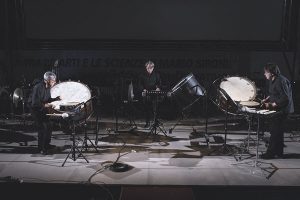 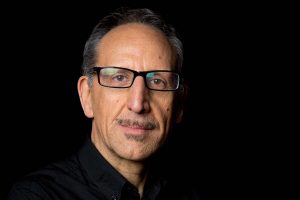 Enzo Filippetti is a professor of Saxophone at the Conservatory of Music “S. Cecilia” in Rome. Both as soloist and as a member of the Quartetto di Sassofoni Accademia he has given concerts in Italy and in numerous and repeated tours all over the world. In addition he has also been involved in the development of the repertoire of contemporary music, as well as researching the first Italian and foreign repertoire for saxophones. 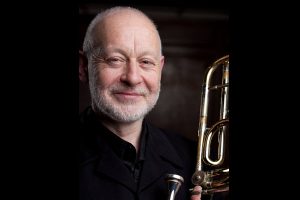 Brass / Ensemble / Improvisation / Composer Performers / Music Theatre. Trombonist and composer John Kenny is internationally acclaimed for his interpretation of contemporary music, having performed and broadcast in over 50 nations to date. In 2017 he was the recipient of the International Trombone Association’s Lifetime Achievement Award – only the second British Trombonist ever to be accorded this honour. 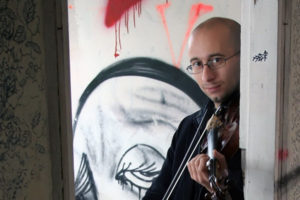 Marco Fusi is a violinist, violist, and a passionate advocate for the music of our time. Among many collaborations with emerging and established composers, has recorded several solo albums. He is a strong advocate and educator of contemporary music. Marco teaches Contemporary Chamber Music at the Milano conservatory “G. Verdi” and is Researcher in Performance at the Royal Conservatoire of Antwerp. 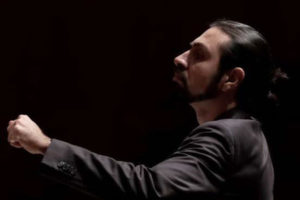 Francesco Bossaglia studied horn at the Chicago College of Performing Arts. In Lugano, Switzerland, he obtained is Master’s degree in Conducting under the guidance of Giorgio Bernasconi. He has worked with many orchestras and has also led numerous operatic, theatrical, dance and multimedia productions. At the Conservatorio della Svizzera italiana in Lugano he is currently Head of Orchestras and Ensembles and chamber music teacher. 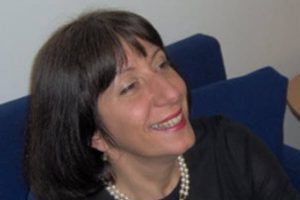 Luciano Berio, in an interview at RAI3 (“Scatola sonora”, march 25th 1993), told Sandro Cappelletto who was asking him if, ten years after her death, Cathy Berberian had any successor: “…in Italy there is a singer who is totally different from Cathy, but of great genius and intelligence: Luisa Castellani”. The magazine “Specchio” of “La Stampa” (Turin) put her among the 7 best singers in the world in the 90’s, and she has had press reviews in 18 different languages. 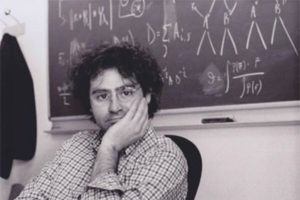 Carmine Emanuele Cella, is a composer, a teacher, and a researcher in applied mathematics. As a composer  in 2008 he won the prestigious Petrassi prize for composition. Starting from January 2019 Carmine is Assistant professor in music and technology at CNMAT in UC Berkeley. 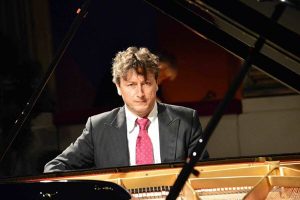 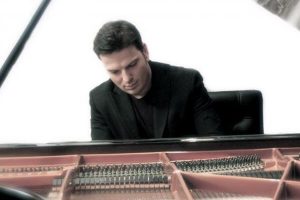 Marcello Mazzoni was born in Reggio Emilia and started his piano studies in the local musical institute “Achille Peri”. He has given concerts as a soloist with orchestras in the most renowned concert halls and festivals and frequently plays as a soloist with renowned ensembles. 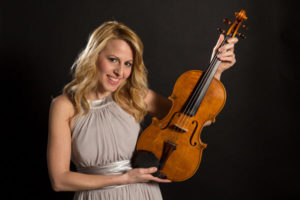 Silvia Mazzon has won many competitions in Italy as a violinist and chamber musician and performed as a soloist  in Italy and abroad. In duo with pianist Marcello Mazzoni, recorded two CDs: the first dedicated to the three sonatas for piano and violin by J. Brahms for Limen Music and the second dedicated to the Italian composer Alberto Franchetti with his Romances for violin and piano for BAM. Silvia Mazzon is violin teacher at the Istituto Peri of Reggio Emilia, and at the Conservatorio of Pescara (Italy). 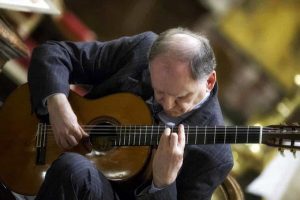 His performing career takes him to more than fifty countries in all five continents, working with prestigious Institutes and Festivals. Andrés Segovia wrote of him: “He will soon be a famous name among the best guitarists of our time”. 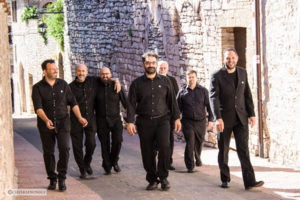 The Anonima Frottolisti project was started in Assisi as a result of a meeting of musicians who had had international experiences of musical performance and study. Its purpose is to deal with the repertory of European Humanism. The practice and research of this ensemble are based on the use and analysis of original scores, in the awareness of the value of the writing and theory of that period. 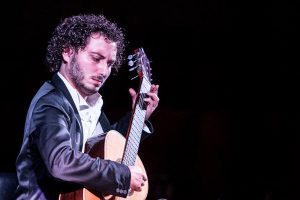 Marco Piperno from Lecce, graduated when he was 17, followed by Bruno Battisti D’Amario at the Music Conservatory “Santa Cecilia” in Rome. Since 2014 he won numerous guitar competitions in Italy and in the world obtaining twenty international awards including more then ten first prizes.